Posted on September 1, 2009 by sogalitno

August 29th is a day already marked with personal memories.

FOUR years ago on the 29th of August – yes, the Day of Katrina and, now, the day of Ted Kennedy’s funeral and burial – I moved to my current apartment in a village on the Hudson River north of NYC.  This past Saturday the coverage of the Kennedy funeral and burial pushed off almost all memorial coverage of Katrina and New Orleans’s recovery (and what about the rest of the coastal territory that was hit – Mississippi and Alabama?). 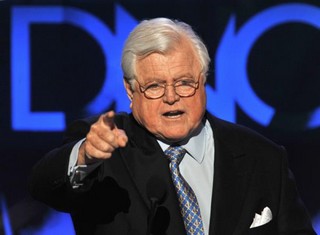 the wake on Friday night and the funeral and the burial, by the end at 830 Sat night was exhausted and wrung out from crying (although there was a lot of laughter on Friday night).  It was a rare opportunity to be a part of a family’s celebration and farewell to the senior member of their clan.  At times I felt like an interloper but mostly I was very grateful to the Kennedys for sharing with the world this opportunity to grieve for a truly flawed but hard working, courageous and brave human being.

Watching his widow, Victoria Reggie Kennedy (a Louisiana gal, yeah), was incredibly moving.  Impressed with her grace and poise, I grieved with her and could only imagine the stress of the last four days much less the last 18 months.  It was so obvious to the world what she brought to EMK’s life – a renewed sense of purpose and it seemed humility and redemption.  As a Catholic, there are resonances with the Kennedy’s lives with my own that somehow have always been a thread of connection for me.

I was surprised at the depth of my grief and deep emotional reaction to Ted Kennedy’s death. One of my sisters wrote that she felt her strong reaction was more “over the loss of our own father long before he actually died”  and she is right.   Hearing what a stalwart, constant and consistent presence Ted Kennedy was in all his children’s lives as well as the extended family of nieces and nephews was hard  – who doesn’t want a strong father (or a strong father figure)?  And for those of us who didn’t have that in our adolescent and adult lives – the well is deep.

I, like many of my generation, remember watching JFK’s funeral on the still new black and white TV – after being sent home from school days before with the dire announcement that “the President is dead” over the intercom.  Then later as I was struggling with adolescence, Bobby was shot and then Martin Luther King.  At the same time, Baton Rouge was feeling the waves of the civil rights movement breaking from Mississippi and Alabama; although never to the extent that especially Alabama suffered.  However, it did touch me personally… a story for another day.

Many years later found me in Washington DC at graduate school at American University.  In need of a “day job” to pay the bills, I wound up working at the National Committee, Arts for the Handicapped  (now VSA Arts).  This group was founded by Jean Kennedy Smith whom I met at the national conference that winter.  My memories are of a gracious intelligent woman whom I admired for her charity and the organization. Shortly I left that job of Admin Assistant to take a better position with another arts organization but remember those few months there mingled with my first months in DC - my first EVER living in another city and another state and that close to the North (DC is really a Southern city in temperament, at least it was then).  The week after I moved to DC, my parents separated; my first six months culminated with the death of my beloved maternal grandmother the beginning of December.  Looking back, I wonder that I handled all the stress – new city, new job, graduate school, being alone in the “north”, parents’ separation and then MaMa’s death.  Ah! the folly and strength of youth!

Fast forward to Monday, August 9th, 2005, I remember turning off the TV at noon on that Louisiana-weather (hot and humid) Monday with the relief that (at that point) the hurricane was passing by NO with only some heavy rain and some flooding.   It was not until after noon on Tuesday that the Verizon guy left and I turned on my laptop and plugged in to find out what was really happening and spent the day reeling and crying as I comprehended what had occurred.  The rest of the “moving week” was spent alternately watching CNN (on full time the moment cable was hooked up) and unpacking and settling in.  One of my sisters had her home in the flooded area that did NOT get the coverage the Ninth Ward got – Mid-City.  Her house had 8–10 feet of water – almost to the ceiling – and she and her husband lost decades of their work. She is a theatre director and he is an artist and writer as well as most of their belongings.  Thank goodness they were traveling on vacation in Maine with their young son and so escaped the trauma of the evacuation and immediate horror.  But they also did not have a chance to save anything before the flooding. 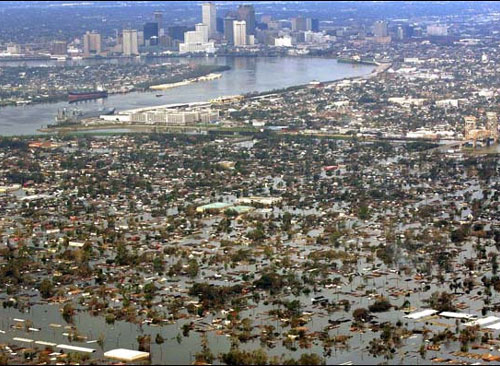 The irony for me that week was that I was sitting with all my belongings stacked to the ceiling around me and my sister and thousands of others had lost practically everything.   At points I wanted to just lock the door and leave it all – go to NO and help, move to Canada, be anywhere but there dealing with it.  The mess that unfolded on the TV screens those weeks following Katrina was indescribably horrific for a native Louisianan to watch – the bumblings of governments at ALL levels including state and city, the despair, the helplessness – and then afterwards, hearing of my sister’s travails dealing with the aftermath – which went on for years.

I look up now from writing this – and have to shake my head.  I am writing at a small desk in my recently reorganized study (one of the middle rooms) after having spent the last 8 months on a purge/decultering and renovation/organizing project.   Having thrown out or given away from 1/3 to 1/2 of my “stuff”, I am continuing on the path to simpler living; this week’s goal is to reduce my yarn/knitting stash (yarn and unfinished projects).   This anniversary finds me in a very different place.

How are all of these disparate topics connected?

The heartening thing to me about Ted Kennedy was that he lived a large life, made big Mistakes (many of us have a Chappaquidick of our own lives), asked for Forgiveness and moved on – and really that is what Christ asks of us.  People who live large lives make large mistakes but they also make large goods too.

Watching the celebration and farewell of Ted Kennedy inspires me to re-evaluate my life – its past, its dreams, its goals.  I take my inspiration from those around me and those I admire.  Saying farewell to one of them is both sad and reflective. 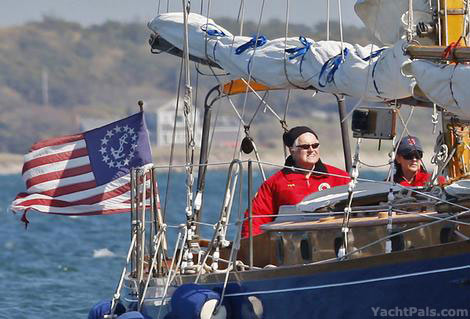 "Fair winds and following seas and long may your big jib draw!